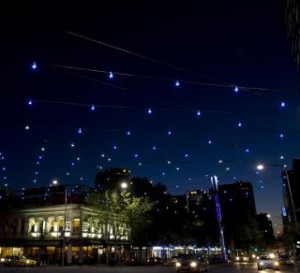 The Municipality of Melbourne has recently changed the lighting system over the intersection of Lonsdale and Russell Streets in Melbourne.

The representative of the City Hall and the Minister of Multiculture in Victoria presented officially the new light installation that is blue and white in honor of Greece.

A limelight has been installed over Lonsdale and Russell Streets that creates the illusion of a blue sky with white stars, the colours of the Greek flag.

The Mayor of Melbourne Robert Doyle stated, “This area is fully associated with Hellenism in Australia, something that we intended to underline through the installation of the new lighting system”.