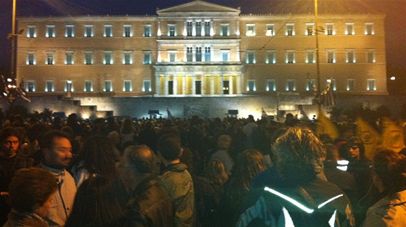 Sol Square in Madrit, Tahrir Square in Cairo, Green Square in Tripoli, Syntagma Square in Athens, Zuccotti Park in New York and now Paris, London, Tokyo, Brussels and the list goes on and on.
Greek indignandos gathered up for once more at Syntagma Square, the symbol of the clash between the direct democracy of the ancient world and the decay of modern Greek politics.
But today Greek demonstrators were not alone. They were joined by demonstrators across the world who rallied in central squares accusing bankers and politicians of wrecking economies. From Paris to Hong Kong and from Berlin to New York rioters raised their voices against corporate greed, banks and the extreme disparity between the rich and the poor capitalism has brought to the world. Inspired by the “Occupy Wall Street” protests in New York, demonstrations took place in more than 80 countries but it was in Italy that the global “day of rage” erupted into violence. Images circulated by global media decpicting Italian police in Rome firing tear gas to violent protesters who were smashing shops and bank windows, torching cars and hurling bottles are almost identical to those of Athens. Maybe today’s global demonstrations will make EU leaders realise that it is not about Greeks anymore. It is about the global middle class that has now turned to a new global underclass and feels increasingly marginalized, suffering the consequences of cuts, deprivation and uncertainty while those who actually caused this international crisis are still profiting from it!