St. Nicholas Greek-Orthodox Church To Be Rebuild at the WTC

The Port Authority of New York and New Jersey and the Greek Orthodox Archdiocese of America officially signed an agreement today on rebuilding the church of St. Nicholas, which was destroyed in the terrorist attacks of September 11, 2001.

Governor Andrew M. Cuomo today announced that he, joined by Port Authority Executive Director Chris Ward, representatives of the Greek Orthodox Archdiocese and St. Nicholas Parish and Majority Leader Dean Skelos, signed the agreement that permits the rebuilding of the Church with a nondenominational bereavement center at the east end of Liberty Park, at 130 Liberty Street. The agreement follows a four-month independent engineering study commissioned by the Port Authority and the Archdiocese, which found that the Church could be built on the site with minor modifications to the original plan and with no impact on the World Trade Center construction schedule. 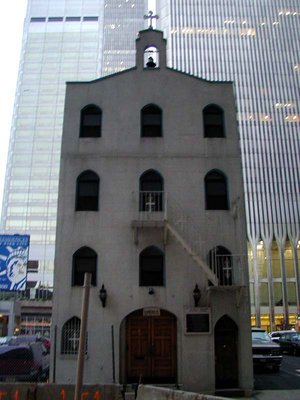 “We lost St. Nicholas Church in the destruction of September 11 and for too long its future has been uncertain,” Governor Cuomo said. “Rebuilding St. Nicholas Church, with a nondenominational bereavement center, is not just good news for the Greek Orthodox community, but for all New Yorkers. With this agreement, we are continuing New York’s collective healing, restoration, and resurgence. Now we are finally returning this treasured place of reflection to where it belongs.”

As a result of settlement discussions mediated by the Governor’s office, the Port Authority and Archdiocese agreed to an independent engineering study to determine the feasibility of siting the Church at various locations in Liberty Park. The four-month study was led by Peter Lehrer, a nationally renowned construction expert, who worked on the project on a pro bono basis with Director of World Trade Center Construction Steven Plate and independent engineers Gorton & Partners and McNamara/Salvia, Inc. The study concluded that structural issues could be resolved to site the Church at 130 Liberty Street at significantly reduced cost compared to the original agreement and with no delay to construction at the World Trade Center site.

The church and the port authority had been at odds over the details of a land swap that will move the church slightly down the street to make way for some of the giant construction projects now under way at ground zero.

The settlement, mediated by the office of Gov. Andrew Cuomo, will end a lawsuit filed by the archdiocese earlier this year. Under the deal, the Port Authority will pay for site-work and below-ground infrastructure. The cost of that work is estimated to be about $25 million, according to the governor’s office. The archdiocese will pay for the construction of the chapel.

His Eminence the Archbishop Demetrios said “We are grateful to everyone who has helped in bringing to reality the dream we have nourished for ten long years. St. Nicholas Church, rising again with the help of God at Ground Zero – where it stood spiritually important for 85 years, is an affirmation of the significance of religious freedom and experience for all New Yorkers and all Americans”

The original Church was founded by Greek immigrants in 1916.

U.S. Reps. Carolyn B. Maloney (D-NY) and Gus Bilirakis (R-FL), co-chairs of the Congressional Caucus on Hellenic Issues, applauded the agreement announced today between the Port Authority of New York and New Jersey and the Greek Orthodox Archdiocese of America to rebuild St. Nicholas Church at 130 Liberty Street in lower Manhattan.

“I congratulate Governor Cuomo, Archbishop Demetrios, and Chairman Ward for their hard work to reach this agreement. Rebuilding St. Nicholas Church, along with the major progress underway at the World Trade Center site, will help complete our city’s recovery from the 9/11 attacks. St. Nicholas Church has been an important part of the Hellenic community for generations, but has also served as a place of respite, calm, and prayer for countless others in the lower Manhattan community. I am delighted that this iconic Church will soon rise again,” said Rep. Maloney.

“The Greek Orthodox Archdiocese has been ready, willing, and able to re-erect its beloved church for some time now and I am pleased that the Port Authority and New York City officials have reached this important and symbolic agreement to reconstruct St. Nicholas Church. As the only house of worship destroyed in the tragic attacks on 9/11, St. Nicholas not only serves as a house of prayer and worship for the Hellenic community, but is a reminder that the United States and its resounding faith cannot and will not be held down by those who wish to harm us. I look forward to the day that this church re-opens its doors and the first post-9/11 Divine Liturgy is celebrated,” said Rep. Bilirakis.