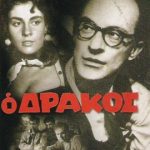 Guardian Newspaper featured Greek Film ‘The Dragon’ from Nikos Koundouros in article by the film critic of Guardian Peter Bradshaw.

The original O Drakos, or The Dragon, was made by Koundouros in 1956 and played at the Venicefilm festival.  It earned Koundouros a reputation of being the “Orson Welles of Greece” and was considered one of the most important films in Greek cinema.

Bradshaw stated that since the publication of Jonathan Franzen’s Freedom, interest in ‘The Dragon’ movie has been steadily growing. Franzen has restored the reputation of the Greek film-maker, Nikos Koundouros, not the London Greek Film festival, according to Bradshaw.

Lovers of this novel will know that for their very first date, Walter takes Patty to a movie. Somewhat dssapointing for the unpretentious and sporty Patty, it’s a black-and-white film from the 50s, being screened free of charge at the University’s Art Department auditorium, a grim indication that it is not going to be much fun.

However, the Greek film writer John Stylianou has posted the film in its entirety on YouTube and put English subtitles himself. Guardian Newspaper has already posted the video on its website.