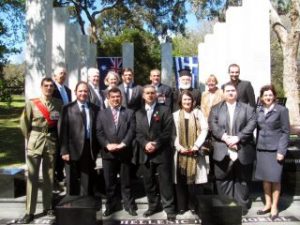 Many Greek Australians and Australian government and opposition officials paid tribute to the fallen of World War I and World War II at the Australian Hellenic Memorial in the Domain Gardens yesterday.

During the event, the names of Australians who died fighting overseas in the battle of Greece and Crete in WWII along with those who died on the island of Lemnos in WWI were read. The event was attended by veterans and their families from around Victoria, as well as many onlookers who happened to stroll by.

The event was also attended by its founder Peter Kalimnakis, who ensured that the memorial  would become part of the Melbourne landscape.

The Greek orthodox clergy (St Helen and Constantine’s church) were also present and gave the event, and those who fell in battle, their blessing.