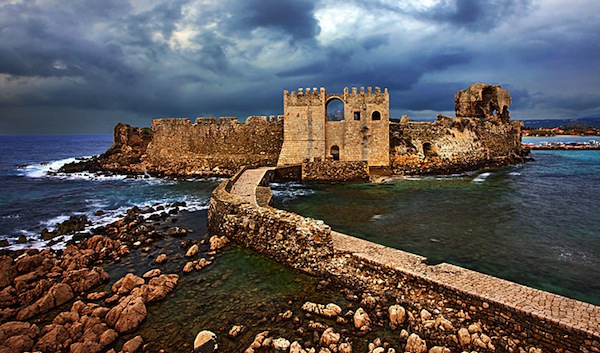 Fortresses – symbols of the wealth and power of the Byzantine and Venetian period and built on Greek territory from the V to the XV century to provide protection for the population – are an important part of the cultural heritage of Greece, where they are found almost everywhere.
Most of them are located in the Peloponnese where – according to Dimitris Athanasoulis, director of the 25th Superintendence of Byzantine Antiquities – only in the Messinia (in the southern Peloponnese) zone there are over 50. The problem is that they are abandoned and as time goes by they are at risk of collapse, as has already happened a number of times, and many are not even able to be reached nor visited.
In order to raise awareness on this cultural wealth within the country and to help save them, the 25th Superintendence in collaboration with the Patras Architects University held an international conference on ”Defensive Architecture in the Peloponnese” which – inaugurated by Culture and Tourism Minister Pavlos Geroulanos – came to an end yesterday. Taking part in the conference were 41 experts including archaeologists, architects and historians from Greece and abroad, who discussed a number of subjects concerning fortresses in the Byzantine period, defensive works in the West and its influence on the Byzantine variety.
”The identity of modern Greece,” said Minister Geroulanos in his speech, ”is seen by the way in which it manages its enormous cultural heritage, the way in which it protects it and with which it spreads knowledge of it to every corner of the globe.” As part of these initiatives to raise awareness of this type of cultural heritage in Greece, Greece’s Central Archaeological Council has decided recently to valorise the Pylos Fortress, also known as Niocastro, which was built by the Ottomans in 1573 shorting after their defeat in the Battle of Lepanto in 1571.
The city’s Archaeological Museum will soon be transferred inside of it, in which exhibitions will be held and a film will be shown with the historical reconstruction of the naval battle of Navarino.