[youtube]RSy83KJVEdc[/youtube]
Past the rolling hills that hug to the shores of the Adriatic Sea, a port in Northwestern Greece, Igoumenitsa, appears suddenly. A few dozen kilometers out toward to sea, the green peaks of the island of Corfu can be seen in the evening haze. At first glance, Igoumenitsa seems orderly and pleasant – at least near the port – and, despite its remote location hemmed beside Albania, it is relatively cosmopolitan with modern cafes and multilingual patrons. Among the public were a remarkable number of police who eyed my unfamiliar car suspiciously.
Igoumenitsa was my first stop on this journey to explore Greece’s dire migration situation after hearing from humanitarian NGO’s that it had become a hotspot for migrants who had set up camps on the mountainside next to the port. Unable to successfully make their journey to Italy due to tight border controls, and refusing to go back to Athens to live on a few euros per day, over a thousand migrants, mostly from Africa, built iron and plastic shelters in view of the boats that they believed would take them to a better life.
These people were trapped yet seemed determined to make due of their situation. To return home with nothing to show for their efforts would be seen as a failure…an embarrassment even. In an act of desperation, they had built a camp in the trees and for over a year, the migrants lived together in squalor without running water, electricity and adequate shelter. The daily menu consisted of scraps found in dumpsters. And, on a lucky day, was supplied by NGOs that were quickly overwhelmed by the amount of hungry people arriving each day. Police harassment was common and the local media raised fears of disease and crime brought by migrants. One local newspaper I picked up while I was in town characterized the migrants as animals and coldly poked fun at their  unfortunate living conditions. 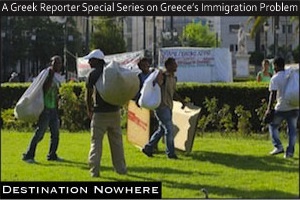