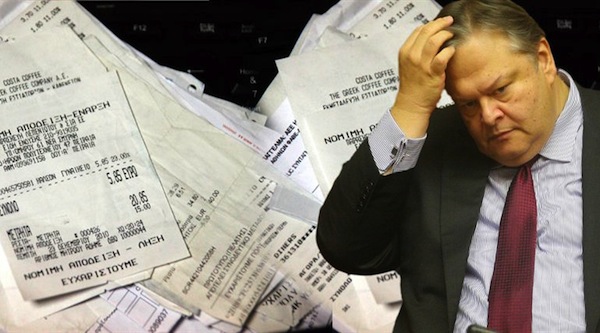 ATHENS – Finance Minister Evangelos Venizelos, who has levied a series of taxes and penalties on workers, pensioners and the poor, said taxpayers will have to pay a penalty in 2012 unless they can produce receipts for their expenditures. It was another in a series of pronouncements of confusing policies that has had Greeks heads spinning about what to do about their taxes. Last year they were told they needed receipts to file their returns this year, but that changed several times and there were contradictory reports from the tax department about what receipts were needed and how many.
Taxpayers have been left uncertain this year as well about whether they would need receipts when they file their 2011 returns next year but now Venizelos said they do, with only a few months left in the year to collect them. But he did not say what the requirements were, adding to the uncertainty.  If taxpayers fail to collect the amount required, they will be forced to pay a penalty equivalent to 10 percent of the tax for the percentage of income that remains unaccounted for by receipts.
Venizelos also succeeded in pushing through the Parliament an emergency property tax to be put into electric bills under the threat of having service turned off for non-payers, and said people earning as little as $6,780 a year would now have to pay taxes too, although tax evaders remain largely untouched. The only exception will be people over 65 or under 30, for whom the ceiling was set at $12,900 as unemployment, now over 16 percent, is more than 40 percent for the young.
“Given Greece’s situation, with its per capita income and its fiscal problem, its tax-free ceiling cannot possibly remain above the European average,” he said. The property tax, if collected from Greeks who are balking at paying on top of a new round of deep pay cuts and more taxes, would bring in about $2 billion a year. Tax evaders cost the country $40 billion.
Compounding the problem for Greeks is that many businesses and professionals don’t give receipts, ranging from open air fruit and vegetable markets to doctors, lawyers, architects, engineers, auto mechanics and others, especially now as Venizelos also raised the Value Added Tax (VAT) in most areas to 23 percent. The new property tax also threatens to shutter even more businesses as shop owners say they won’t be able to afford the increase. More than 65,000 businesses have closed in the last year and trade associations say another 53,000 will be gone in six months.
The minister announced that the measures for 2011 returns to be filed next year, which are expected to be voted on in Parliament by the end of October or early November, will include an increase in the receipts per income ratio, which currently stands at 25 percent, using examples that signify a requirement for receipts of 1 euro for every 2 euros of income.  The newspaper Kathimerini reported: “Since the time remaining until the end of the year is very short, this measure could include expenditure for rent or utility bills, otherwise it will be practically impossible for anyone to collect the amount of receipts required.”
Tax clerks have already been overwhelmed trying to handle mountains of receipts from taxpayers who produced them and that has delayed refunds due taxpayers for months, even as people worry they will get them because the economic crisis has broken the country’s bank and Greece is subsisting on loans from international lenders and will be unable to pay salaries and pensioners past mid-October without the next installment of $11 billion that has been held up because Papandreou has not met all the demands of the Troika of the European Union-International Monetary Fund-European Central Bank which set the conditions of austerity in return for money.
(Sources: Kathimerini)