With the economic world holding its breath over fears that Greece will default, Finance Minister Evangelos Venizelos told an international audience of bankers in Washington, D.C. that his country will do “whatever it takes” to finally balance a budget with a staggering $460 billion debt and said it would not be a scapegoat for what he said was the world’s economic problems. “Greece wants to make it and will make it,” he said in a speech Sept. 25 in Washington after attending the annual meetings of the International Monetary Fund and the World Bank. “We are ready to take the necessary initiatives at any political cost” to improve the economy, he said.
The IMF, along with the European Union and European Central Bank form the so-called Troika lending Greece $152 billion to prevent a collapse caused by generations of profligate spending, packing public payrolls with unneeded political hirings, corruption and runaway tax evasion. The size of Greece’s economy and its debt make it unlikely to be at the “heart” of Europe’s problems and incapable of “causing a domino effect of pan-European dimensions,” Venizelos said. 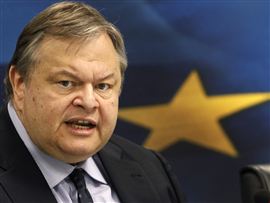 “Greece is not the euro area’s central problem, nor can it be the catalyst” for a financial crisis, he said, noting that Greece’s debt accounts for 3 percent of the Eurozone’s public debt.
Greece’s distress is causing trepidation in the markets along with the worry it may threaten the Eurozone of countries using the euro and even return to the ancient drachma it abandoned a decade ago when EU officials said the country’s officials lied about its economy and faked its books to become a member of the single-currency union.
Venizelos, again trying to soothe investors nerves, said Greece will not leave the Eurozone, although a second planned bailout of $157 billion agreed upon by the Eurozone in July now is hanging in the balance. He is to meet with IMF chief Christine Lagarde while Greece hopes for the release of an $11 billion loan installment from the Troika in October, without which the country will go bankrupt.
Venizelos said recent steps such as the furloughing of 30,000 government employees and a property tax put into electric utility bills, which Greeks have dubbed with a name reminiscent of taxation under the Ottoman Empire’s occupation, will be enough for Greece to meet its budget targets this year although he earlier admitted the deficit, hanging near 10%, isn’t responding to deep pay cuts and tax hikes and that revenues are lagging as Greeks have stopped spending and businesses are failing left and right and young Greeks fleeing the country. That has created what he called a “vicious circle” in which more austerity measures have only worsened the problem, and even while he complained about criticism toward Greece, he asked for more international help. “The main problem for my country is the public sector and the capability of the public administration to offer the necessary services to our people, to our society with a cheaper, more clever way,” Venizelos said.
Economists at Citigroup Inc. told the news agency Bloomberg that they expect the country to begin restructuring its debt as soon as December, in which banks and investors could be paid back 50 percent less than they lent or even less. The July Eurozone agreement was based on a 21 percent reduction in payments. What’s vexing EU officials and made others around the world fearful is that a Greek collapse could trigger the end of the Eurozone and set off a world economic panic and recession worse than the 2008 burst.
Officials from the U.S., China and many other nations are pressing EU leaders for stronger responses to Greece’s problems, but so far Europe has found itself splintered and divided over what to do.
U.S. Treasury Secretary Timothy Geithner warned of “cascading default, bank runs and catastrophic risk,” the kind of gloomy talk reminding of the 1929 Great Depression, but that ired EU officials who complained pressure would worsen the crisis. German Chancellor Angela Merkel said European leaders must circle the wagons to help Greece and prevent market attacks on other EU countries she said could threaten the existence of the Eurozone.
She rejected the notion of Greece leaving the Eurozone, saying that “We can’t force it, but I don’t believe in that in any case” because it would send a signal to financial markets that attacks on the Eurozone will succeed and make fortunes for speculators.  “Maybe Greece leaves, the next country leaves and then the next country after that,” she said. “They would speculate against all the countries.” Merkel is scheduled to meet Greek Prime Minister George Papandreou, who has been absent from discussions over the crisis and handed control to Venizelos, on Sept. 27, two days before German lawmakers vote on supporting more aid to the debt-strapped country.
(Sources: BusinessWeek, Bloomberg, Reuters, AP)