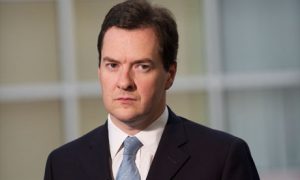 George Osborne was forced to deny reports that world leaders were preparing for Greece to go bust immediately.

The Chancellor issued a hastily drafted statement after a highly placed British Treasury official outlined behind-the-scenes moves to allow Greece to default on its debts.

In the informal briefing at a restaurant in Washington – where the World Bank and International Monetary Fund are devising strategies to cope with the financial crisis – the official admitted that Greece’s creditors would lose half of their money, dealing a potentially devastating blow to the global economy.

But after accounts of the briefing flashed around the world, Mr Osborne was forced to say: ‘No one here has put forward a plan for that. Greece has got a programme and needs to implement it. However, it is also clear that the eurozone needs to deal with its own issues.

‘There’s a recognition here that the global debt crisis has entered a dangerous phase, but I am also optimistic we have made steps towards resolving it.’

Although Ministers are officially still insisting publicly that the country should honour its obligations, behind closed doors, the G20 has agreed Greece will never be able to repay its staggering £350 billion of government debt.