TechNews
GreekReporter.com Europe Nana Mouskouri is Back in Romania for December Concert

Nana Mouskouri is Back in Romania for December Concert 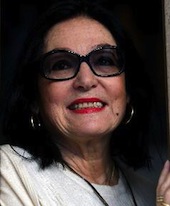 Singer Nana Mouskouri will come for the second time to Romania on December 4 this year, for a concert to be held at Sala Palatului in the capital city. She came in Romania for the first time in 2008 for a UNICEF charity gala.

Part of the money raised from the concert to be held this year will also be donated to UNICEF, the organization whose ambassador Nana Mouskouri has been from 1993.

Nana Mouskouri, Ioanna Mischouri on her real name, is a Greek singer who has sold nearly 400 million records worldwide in a career spanning over five decades, making her one of the best-selling music artists of all time.

A Greek prosecutor called for convicted terrorist Dimitris Koufontinas to be forced-fed as he entered the 47th day of a hunger strike.
Diplomacy