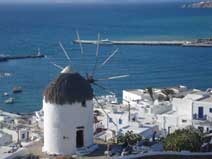 According to a press release issued by Sun Newspaper, the Judges House part of the X-Factor competition is going to be filmed in the Greek island of Mykonos, while the Greek-origin judge, Tulisa Contostavlos will be also there.

Filming will last 4 days and will take place in the area of St. Ioannis, where the villas are characterized by a sense of distinct luxury, according to sources.

Finally, during the X-factor shows, images taken from the areas of Ornos and Chora (Centre) will be presented.