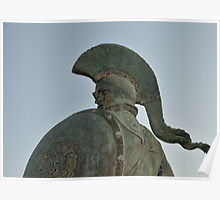 Greeks in Melbourne expressed their outrage at the vandalism of the bust of King Leonidas, that beautifies the city of Melbourne.

The Pallaconian Brotherhood of Melbourne ‘Leonidas’ took the initiative in collaboration with the municipalities of Moreland and Sparta, which are brother cities, to place the bust of Leonidas in a small square named ‘Sparta Place’.

The bust is in the foreground of the city map of Melbourne.

The chairman of the Pallaconian Brotherhood of Melbourne, Christos Paikopoulos, has stated that the photograph on the front page of the city map is an offence not only for the Greeks but also for the Spartans.

“This bust is above all a battle monument. This hero died for liberty and thus he deserves respect and not mockery”, Christos Paikopoulos emphasized.