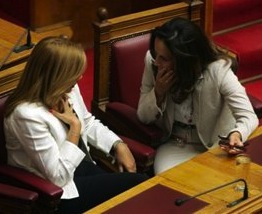 The plague appeared in Greece as a weapon of divine wrath. Agamemnon, offended the priest of Apollo and the God spread pestilence among the Greeks.
Greek News

Greece confirmed 884 new coronavirus infections in the last 24 hours, with 7 of these identified at entry points to the country.
Greece

A seven-year-old boy died after a fire broke out at a migrant camp in Thebes, northwest of Athens, late on Tuesday. The child's nationality was not released.