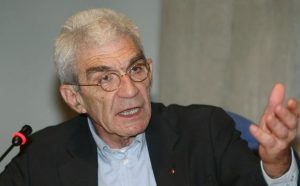 “Τhe municipality of Thessaloniki fervently supports and aids the efforts made by the Greek government to recover the documents of the town’s Hebrew Community from its present holder, the Russian government”, said mayor of Thessaloniki, Yiannis Boutaris during a meeting he had with 60 American-Hebrew businessmen and representatives of several bodies and organizations from the USA, who are currently visiting Greece.
On her part, Mrs. Linda Hurwiz, head of the American-Hebrew businessmen, said that their journey to Greece was the result of their wish to wander in the historic town and meet its mayor in order to learn more about the town’s hospitality and history.
In his brief welcoming, the deputy mayor of Development and Management of Financial Resources, Hasdai Kapon referred to his own Hebrew origins and the history of his parents surviving the Holocaust.