Tension Escalates Between Turkey and Israel Over Cyprus Block 12 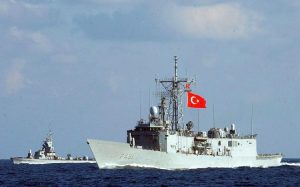 Turkey has sent out three Navy frigates on patrol to the Eastern Mediterranean so as to secure the waters near Israel’s 12-mile limit and protect “freedom of the seas”, said Turkish daily newspaper Sabah yesterday.
The former allies, Turkey and Israel, have now reached the point of threatening one another with military confrontation, since their relationships have gotten worse after the deaths of nine Turkish activisists in 2010 and Israel’s refusal to apologize for it.
For Turkey this Israeli action constitutes casus belli and Israel promised to use force if necessary for its protection. Turkey has been trying hard to gain military presence on the offshore territory of Cyprus, where leviathan reserves of oil and gas are scheduled to be exploited with the cooperation of Israel by the end of the month. The two neighboring countries have stated their determination to defend their national interests, backed by Greece and Russia, which have also denounced Turkey’s threats.
Recently, Turkey’s PM Recep Tayyip Erdogan claimed that the Turkish Cypriots should be included in the oil and gas exploitation given that they have equal rights to the island’s natural resources. Christofia’s government, however, rejected this thesis by rejoining that the Turkish-Cypriots would benefit from the the new oil and gas industry after the Cyprus Problem is solved.
Cyprus’ energy-rich Block 12 has shaken the regional chessboard and diplomatic sources of Athens fear that Ankara could retaliate by causing tension in the Greek front, and in particular, in the exclusive economic zone (EEZ) of the small island Kastellorizo, which borders the EEZ of Cyprus. Should they keep the tension levels this high, a hot incident in the region is only a matter of time.