No More Doubts Over Greece's Default 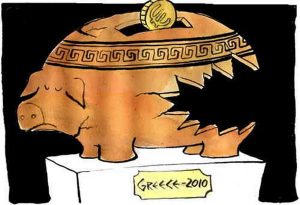 Greece is falling into a deeper dismay after more and more of its Eurozone partners are expressing their certainty over the former’s sovereign default.
After the revelation of Germany having a “Plan B” in case of Greece’s default, the representative of Angela Merkel stated clearly that “the Greek default is no longer a taboo”. A few days earlier, the German Economy Minister, Wolfgang Schäuble, had also expressed his doubts over a possible way out of the crisis for Greece.
According to Reuters, the Europeans are now sure that Greece will not be able to avoid a moratorium within the following months. At the same time, the possibility of a Greek default has skyrocketed CDS to 95,85%, with Citigroup not ruling out a debt restructuring scenario for the year 2012.
The overall negative atmosphere made the European exchange markets reach a 26-month low, while French banks have been degraded by Moody’s because of their exposure to the debt of the European South and the rumors concerning the Greek default.
After the departure of Troika, which set insecurity on fire both inside and outside Greece, the negotiations between Greece and the IMF/EU and ECB over the 6th installment of the loan are planned to commence once again, as stated by the President of the EU, Herman van Rompuy.