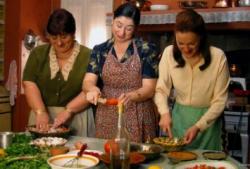 The film “Politiki Kouzina” still captivates its audience today after its initial release nine years ago.

The film was honored with the title of best film at the Balkan Festival in Gastronomy and Filming, which took place in Albania from August 29 to September 4.

During the festival, many films from Albania, Bosnia- Herzegovina, Croatia, Cyprus, Greece, Kosovo, FYROM and Roumania were presented while a significant part of the Festival was dedicated to local kitchens of these countries.

The director of the film, Tassos Boulmetis, was present at the festival as president of the Hellenic Academic Cinema. He had the chance to meet representatives of all the participating countries.

The jury of the festival consisted of actors, directors, and professors of the university.

Greek and U.S. Coast Guard and naval forces conducted joint exercises in the Arabian Gulf in one of the most strategically-important areas of the world.
Crime