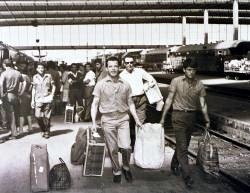 Turkish state television TRT is preparing extensive tributes to immigrants in Germany for the occasion of the fiftieth anniversary of the signing of an agreement between Turkey and Germany.  The celebration will take place this coming fall.

For this reason, TRT ‘s crew recently visited Germany, where it interviewed not only Turkish immigrants, but also representatives of other migrant groups (Greeks, Italians, Spaniards, Portuguese, etc.) in an attempt to detect common points in the 50-year course.

TRT’s crew expressed the desire to visit Thessaloniki in order to meet Greeks who have returned back to their countries, as well as scientists, who have dealt with the immigration issue. The trip was organised with the help of the President of the Federation of Greek Communities of Germany Costas Demetriou, who not only organized it but also accompanied the Turkish mission to the place.

“The 50th anniversary of the signing of the agreement with Germany is an important event for us, considering that about three million Turks live in Germany, of whom one million has the German citizenship,” said Hasan Tsakir, TRT’s production manager. All tributes prepared by the Turkish state television will be broadcast on various television channels of Turkish television.

There will also be an extended tribute to other immigrant groups from countries of the Mediterranean like Greece, Italy, Spain, Portugal, and from the former Yugoslavia living in Germany. Speaking to Greek immigrants in Germany, TRT’s journalists found that their fate coincides with that of the Turks, something which was also confirmed during the contacts they had with them in Thessaloniki.

Among others, they met with Gregory Tekos, president of the Association of Expatriates and Immigrants of Germany, based in Thessaloniki, the Rector of AUTH John Mylopoulos and Professor Paul Pantazis, Director of Radio ERT3 Paul Nerantzis etc.

The impressions of TRT’s crew from the capital of Hellenes Abroad- as Thessaloniki is sometimes referred as – who visited it for the first time were great, as they told us.

There has been good communication between migrant organizations of Greeks and Turks in Germany to find solutions for the issues affecting them, through the Federal Council for Integration, an official advisory body to the German government, which reports directly to Chancellor Angela Merkel.