GRNews
GreekReporter.comGreeceGreek bureaucracy chaos: photocopies instead of books for Greek students on September,...

Greek bureaucracy chaos: photocopies instead of books for Greek students on September, 12 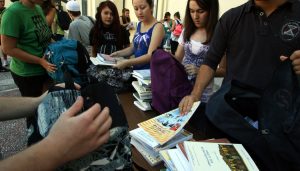 The highly bureaucratic nature of  the Greek governance structure hits again! On their first day at school next Monday, Greek students instead of books will be given photocopies and Cd’s! Teachers will have to look for all the material they need online (given of course that there actually is a computer and an Internet connection working at their school).
And as it usually happens in the chaotic Greek public sector, no single body coordinates their work and everyone washes their hands putting the blame on others.  In addition to the Ministry of Education three other Ministries share responsibilities as well the State Council , but they were not able to communicate effectively in order for the books to be ready on time- mind you they had plenty of time as the procedure begun last February. Minister of education Anna Diamantopoulou blamed government bureaucracy,  but vowed to distribute school books as soon as possible.

Despite several decades of reform after reform, public education in Greece still remains orderless. And with the government not being able to accomplish such a simple task, Papandreou’s European counterparts have a lot to worry about.