13,5% of French Citizens live under the Poverty Threshold 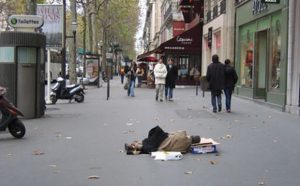 According to this new research coming from the French Institute of Statistics, 8.2 million people are considered to be poor instead of 7.84 million people of 2008.

The poverty is due to the financial crisis, which is causing a greater number of unemployment. A middle class French citizen earns €10.410 per year. In comparison to 2008, this  has been reduced by 1.1 %. On the other hand, only 10% of the population is considered to be wealthy and seems to have had an income increase by 0.7% , earning €35.840 annually.

Everything indicates that everyone has been affected by the crisis, however the middle class have paid mostly.

Convicted terrorist Dimitris Koufodinas, who has been on hunger strike for 45 days announced on Monday he will stop drinking water too.
Greece

Stylianos (Stelios) Kyriakides is a Greek legend for all Marathon runners, although he is best known for winning first place in the Boston Marathon in 1946.
Diaspora