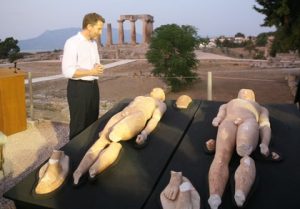 In the evening of Tuesday August 16th, the Minister of Culture and Tourism, P. Geroulanos, gave the Archaeological Museum Corinth the two Kouroi which had been illegally removed from Klenia in Corinth.

The two marble Kouroi were stolen by illegal dealers and, after coordinated actions of the Ministry of Culture and Tourism, the Ministry of Citizen Protection, and the Hellenic Police, the statues were returned to the place where they belong.

On May 18th 2010, the Kouroi were presented to an audience.  Three days later, major excavations were begun to find all the parts of the marble statues, which date back to the prehistorical ages of the  6th, 5th, and 4th  century B.C.

During the excavations, many additional parts were found, and the Archeological Service managed to assemble many parts that had been stolen by the dealers.

The Kouroi will be exhibited in Corinth, which will help to prevent illegal trade and highlight their importance as masterpieces of art.