GRNews
GreekReporter.comGreek NewsGeorge Demos Files Candidacy to Run for US Congress in 2012

George Demos Files Candidacy to Run for US Congress in 2012 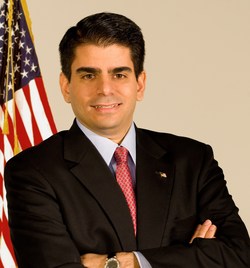 On 08/08/2011, George Demos announced that he filed his candidacy to run for the United States Congress in 2012. Demos is a conservative Republican candidate and a Greek issues advocate in America. He ran during the last election in the First District of New York, coming second in the Republican primary. He played a key role in talks for rebuilding the St. Nicholas Church at Ground Zero.

George Demos has dedicated his entire career to fighting corporate fraud and crime on behalf of the American people. The grandson of immigrants who sailed past the Statue of Liberty on their journey from Greece to freedom and opportunity, George is committed to protecting our freedoms and expanding our opportunities. George’s mother, a former public school teacher, instilled in him at an early age the importance of education, while George’s father, an attorney in private practice, gave him the gift of a strong work ethic, and taught by example the importance of giving back to the community.

George served as a United States Securities and Exchange Commission (SEC) enforcement attorney from 2002 through 2009 where he specialized in prosecuting corporate and white collar fraud.

He received his BA from Columbia University where he majored in political science and his law degree from Fordham Law School where he served on the Environmental Law Journal.

Below is George Demos’ announcement regarding his candidacy in 2012.

America’s hour of truth has arrived. Do we believe in freedom or the tyranny of big government? The choice we make will determine whether America becomes just another chapter in history or continues to be the author of liberty.

More than ever we see how important it is, not just to elect someone with an R next to their name, but to elect a real Conservative with steely determination who will not fail us, who will not falter, and who will not waiver when he gets to Washington.

We live in a nation where ordinary people can achieve extraordinary things if they are allowed to pursue their God-given talents. What separates us from all other nations is that we are a people with a government, not a government with a people. We were founded on the belief that you, not the government, have the first claim to the dollars you earn from the sweat of your brow.

That opportunity to work hard and save for your dreams and for your children is what led my grandparents from a tiny village in Greece. They couldn’t speak the language here, but they understood that in America, if you work hard, anything is possible.

So why is it that today we are busy importing the same heavy handed big government, big tax policies that our ancestors fled from? This is the United States of America, not some broken down European socialist republic.

We are now in the longest recession in American history caused and prolonged directly by the policies of liberals like Tim Bishop. Too many of our neighbors are out of work, looking for a job -including right here in Port Jefferson -and they are wondering why their jobs were outsourced to third world nations. Gas prices are skyrocketing and it costs a fortune to drive on the LIE. But liberals like Tim Bishop have their hands in our pockets and they will not stop until they empty our pockets.

President Obama tried to spend his way out of this economic storm, and he actually laughed that “shovel ready was not as shovel ready as we thought.” Well, the jobless in the First District are not laughing. Tim Bishop voted for the same reckless stimulus bill and laughed right along when it failed. Their answer now: do it again. Take more money from the pockets of hard-working Long Island families and waste it. That didn’t work then and it will not work now.

We need a true Conservative who will stand up and fight for the sanctity of life and defend our Conservative values.

As Ronald Reagan, the eternal optimist, used to remind us, for America there will always be a bright dawn ahead. Long Island has always been the leader in that can-do American spirit. Long Island built the lunar module so that America could reach for the stars. Today we stand by and watch as the last space shuttle is mothballed.

But you and I still believe in America. And if you’re the kind of person whose eyes still well up every time you hear God Bless America, whose heart swells with pride every time you see a brave American serviceman in uniform, and who feels truly blessed, everyday, to live in the greatest nation in the history of the world – then I am your candidate and this is your campaign. I am one of us. I want to fight for us and I want to fight for our Conservative values. I want to be your Congressman. I am George Demos and I’m asking for your vote. Thank you.