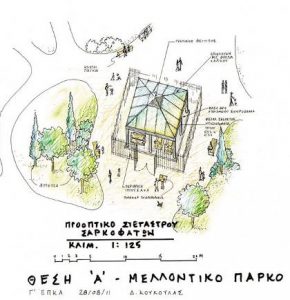 The Ministries of Culture and Environment decided to upgrade the archaeological site of the Platon Academy.  The third Ephorate of Antiquities has already begun to mark out the ancient routes and visitors will be able to walk in front of remnants of the ancient buildings. There will also be signs to provide information about historical sites which have not been preserved.
For the past ten months, work has continued not only on the archaeological site, but on building an open park for residents of the area. In addition, a road is being built to link the regions of Kerameikos with Platon Academy. The architectural design of the project will cost 2 million euros which have been offered by the Prefecture of Athens.
The area of Platon Academy was inhabited from ancient years until the 6th century AC. Excavations of the site began in 1929, thanks to the initiative and funds of architect P. Aristofronas.
The ancient findings, discovered between  the 1930s and the 1960s, will be transferred to new storerooms on Ifigeneia Street close to the Academy. A roof of 50 square meters will be constructed to house an exhibition of 50 marble sarcophagi from the Hellenistic and Roman Periods.
The entire area will be open to visitors. The cost of the project upgrade for the site is projected to reach 1 million euros, which will be financed by the National Strategic Reference Framework 2007-2013.