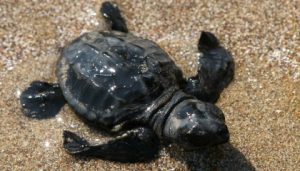 On Tuesday, July 26th,  the first baby Loggerhead (Caretta-Caretta) turtles of the season appeared on the beach of Gerani, Chania.
Volunteers, during the morning patrol on nesting beaches, found traces of 17 small turtles, which instead of following the way to the sea, headed to the bright lights of the apartments back on beach. Despite the shading made by the volunteers of ARCHELON Sea Turtle Protection Society to protect this nest, the turtles were disoriented by the bright lights on their way to the sea.
Volunteers managed to save 10 of them in found in the tourist business area, taking them back to the sea. The other 7 have not yet been found, meaning that the turtles have distanced themselves greatly from the sea, making their deaths unfortunately certain due to dehydration or exhaustion.

The problem of light pollution is not new to the nesting beaches of Crete.
On the bay of Rethymnon, the excessive tourism development makes shading in almost all nests necessary (from 135 nests, 125 are shadowed!) to protect turtles from bright lighting. The same problem exists in the Gulf of Chania, where light pollution is created by both the lights of tourist businesses and the municipality lighting of the coastal road.