Epidaurus is not the only place to see great theatrical plays in Greece. Whether you are relaxing in Cyclades or Trikala, August in Greece is interwoven with theater. From ancient drama, Shakespeare and contemporary comedy, to Pepelope Delta’s ideal-for-kids tales, we’ve put together a list of the five plays currently touring the country you can’t afford to miss. 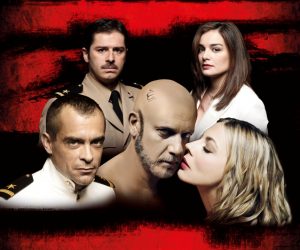 Direction: Konstantinos Markoulakis and Giorgos Kimoulis
Giorgos Kimoulis, Kostantinos Markoulakis and Smaragda Karidi are no doubt the “hottest” theatrical triangle of Summer 2011.  A troubled veteran kills his wife after been tricked by his evil friend. Giorgos Kimoulis delivers in a modernized way some of the greatest poetry Shakespeare ever wrote, fully conveying the emotional and physical violence of Othello’s long dark night of the soul as the evil Iago (Konstantinos Markoulakis) poisons his mind and persuades his deluded victim to kill the thing he loves the most, his Desdemona (Smaragda Karidi).Kimouli’s resonant baritone voice and majestic appearance in combination with Karidi’s vulnerable beauty result in a scene so moving that it is almost too painful to watch.
2/8/2011 Οiniades, 3/8/2011 Αrgos, 4/8/2011 Ζakinthos

2 Hamlet (William Shakespeare)
Direction: Themis Moumoulidis
Aimilios Chilakis bathes his hands in blood  this summer in Shakespeare’s most quoted play. Moumoulidi’s “frustrated Hamlet” seems rather allegorical and carries an unexpectedly topical message amidst the riots of  frustrated Greek people. After Hamlet’s father is murdered and usurped from his Danish  throne by his own brother, Claudius, the crime is compounded by Claudius’ marriage to Gertrude (Eugenia Dimitropoulou), his brother’s widow. When Hamlet’s father’s ghost confirms his death was no accident, it’s payback time for his son. While he ponders whether he can actually complete the deed, Hamlet fights against the darkest questions about life and death. Beneath Hamlet’s anger and bipolar mood swings, Chilakis also discovers a sense of morality and humor in the character, and captures the complexity of one of the most famous Shakespearean protagonists.
1/8 Chania, 2/8 Chania – 3/8 Rethmno-4/8 Iraklion 5/8 Iraklion, 7/8 Porto Rafti, 8/8ILida, 18/8Messologgi19/8 Preveza,21/8 Κozani, 22/8 Grevena, 23/8 Giannena -24/8 Agrinio 21.00, 25/8 Agrinio, 27/8 Νea Makri,  29/8 Ilioupoli-Athens, 31/8 Vrilissia-Athens 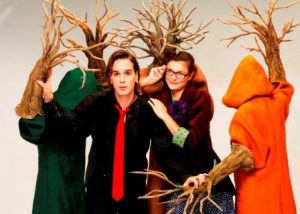 3 Tale without a Name. (Pinelopi Delta-National Theater of Greece)
Direction Takis Tzamargias
The king of a land far away has ripped off his country’s coffers in order to pursue his own pleasures and live in luxury while his suffering people immigrate in order to find a better future elsewhere. The beginning of the play could also be torn from today’s Greek news headlines. Thankfully, Penelopi Delta’s masterpiece delivers the message that there is always hope and things can change. Director Takis Tzarmagias has chosen a dynamic cast that brings to life Delta’s story of survival and the result is truly impressive. The play is ideal for young and old alike so kids will enjoy it too!
2/8 Lixouri, 8/8   Iraklion,10/8   Rethimno ,11/8   Rethimno,, 13/8   Chania,  20/8   Thasos, 22/8 Kavala , 24/8   Katerini 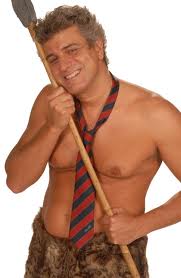 4 Caveman (Rob Becker)
Direction: Anastasia Papastathi
Why are women addicted to shopping? Why do they share every little useless detail with their friends? Why can’t they stop nagging? Why do men love football? Rob Becker’s merciless funny play is all about the differences in emotional and sexual gear between men and women and how these differences can make us misunderstand each other.   The one-person show has sold out to audiences all around the world. In Greece, it’s in its fifth year but the second with Vladimiros Kiriakidis who admittedly is the best Greek caveman to appear yet. Simply hilarious.
2/8 Ν. Μoudania, 3/8 Thessaloniki, 4/8 Trikala, 5/8 Larisa

5 The Madness of Heracles (Euripides-National Theater of Greece)
Direction: M. Marmarinos
Euripides’ Madness of Heracles is one of the least performed works by the great tragedian. In fact, Michail Marmarinos’s production is only the second in the history of the Greek National Theatre. His cast with Kariofylia Karabeti (Megara), Theodore Atheridis (Thiseus) , Minas Chatzisavas (Amfitrion) and Nikos Karathanos (Heracles) looks rather promising. Heracles returns from the Underworld, where he has gone to bring back Cerberus, but finds out that Lycus, the illgetimate ruler of Thebes has sentenced his whole family to death. He triumphantly kills Lycus, but his sin triggers a series of events that lead to his ruin. Hera sends him divine Madness and makes him kill his wife and children. After he realizes what he’s done, the tragic hero ends up in misery and despair.
5/8   Epidaurus, 6/8  Epidaurus ,12/8   Kavala,13/8   Κavala, 17/8   Thasos, 21/8   Thessaloniki, 22/8   Thessaloniki, 29/8  Patras