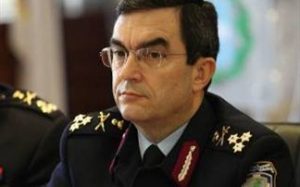 The chief of the Greek Police spoke in front of the Parliamentary Committee on Institutions and Transparency and said he is concerned about the high criminal rate. He noted, Greece is the only European country where daily attacks with Kalashnikov are recorded.
After the episodes of December 2008, which resulted in the murder of Alexis Grigoropoulos by a police officer, there has been a rise of the number of acts of violence and the various groups have changed their strategies and weapons.
The classic molotov bombs have become explosive or have been replaced by bows, catapults with bolts, rocket guns, iron rods, stones, marbles, sledgehammers, fire extinguishers, smoke bombs, lasers, caustic acids and bottles of urines. All these arms are dangerous and can cause great damage.
In addition, he notes, that nowadays it seems some groups seek to cause fatalities and there are acts of violence by extreme right, fascist groups against migrants or the police. He added that after the fire at Marfin Bank, where 3 employees died, a pregnant woman among them, a reduction of violent acts was observed. However, recently during the recent episodes at the region Keratea the anarchists seem to have improved their effectiveness and have regrouped.