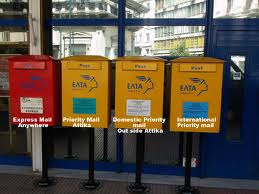 Two armed raiders held up the security van outside the post office in Tolo, on the morning of 22, July. The robbery took place at 7.30 am, just as the sleepy fishing village was coming to life. The two men, drew up behind the security van on motorcycles and according to eye witnesses, demanded that the guard hand over all the money. When he claimed that there was no cash, one of the raiders fired a warning shot just inches from his feet.
GreekReporter, Lorraine Eyre who was on the scene and spoke to eyewitnesses, said that the whole neighborhood was in shock, as the daring robbery took place in broad daylight just as the post office was preparing for a day’s work. One local resident, Mr. Christos Karalias, claimed that he was woken by the sound of the motorcycles and the gunshot that was fired. Mr. Karalias, who lives just a short distance from the post office, didn’t venture outside, but heard the motorcycles roar off up the road.
The raiders, who wore no masks to hide their identities, escaped with €10,000. Police officers, blocked off roads immediately after the raid, but were unsuccessful in catching the thieves. An investigation is now under way to determine how the two men knew such an amount of money was going to be delivered and to their whereabouts.