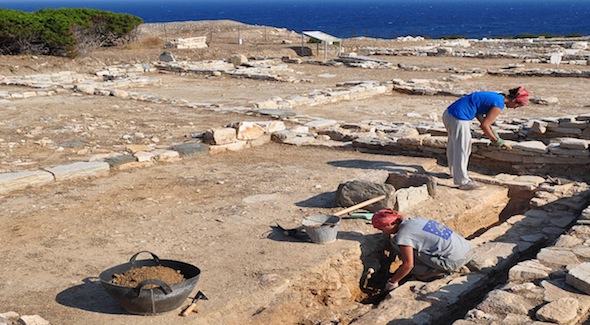 On the small uninhabited island of the Cyclades, excavations which took place from June 2nd until July 8th, brought to light many important discoveries. The excavations were carried out with the sponsorship of the Latsis and Kanellopoulos Foundation.
On another island, Despotiko in the region of Madras, a statue of a young man was discovered with his hand bent on his chest. In the area around the sanctuary, the upper part of a body representing a young man was also discovered. The sculpture has characteristics of the workshops of Paros of the end of the 6th century BC. His discovery will contribute to the study of many fragments which were discovered at the temple. It is possible that some sculptures are related to other fragments which had been discovered in former excavations in the area. In addition, many written findings of archaic and geometric ceramics reveal the existence of a sanctuary from the Geometric period.
On the inhabited island of Tsimintiri, one of the five ancient buildings which date back to the 6th century BC was excavated. The rest of them will be studied thoroughly in 2012. A square marble cesspit used for rituals, the northern wall of the archaic building under constructions of the Late Byzantine Period and 6 new walls under the baths were also discovered.