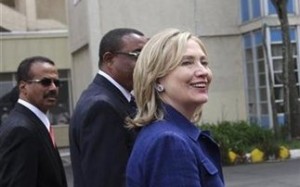 Hillary Clinton will pay a visit to the Ecumenical Patriarchate on Saturday, July 16th .

It will be the first time that Clinton visits the Ecumenical Patriarchate as State Secretary. She and her husband, the former President of the United States, have stated openly that they are in favor of the religious freedoms of the Patriarchate and the re-operation of the Theological School in Chalky.

The State Department announced that after visiting Turkey, Clinton plans to visit Greece on July 17th and 18th. She is going to meet the President, the Prime Minister, the Minister of Foreign Affairs and leaders of other political parties as to discuss issues of mutual interest.