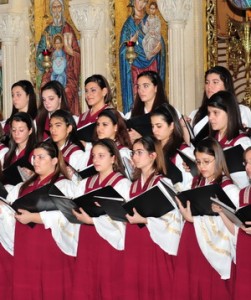 The Youth Choir of the Archdiocesan of America will be giving a concert at the “Ionian Village” in the prefecture of Ilia on Tuesday, July 12th at 8:00 am, as part of its tour of Turkey, Cyprus and Greece. The choir will be accompanied by Archbishop of America Dimitrios and members of the Greek-American community.

The concert will be taking place on the occasion of the 40th anniversary of the “Ionian Village” operating as a “Golden Bridge” between the Greek-American community and Greece.

The second concert was given for philanthropic aim in Nicosia. All proceeds were donated for scholarships for the Cyprus Children Funds.

The Archbishop of America mentioned that the choir makes a cultural contribution, while it promotes art. These songs touch, support and help every human no matter of age, nation, culture and financial background.