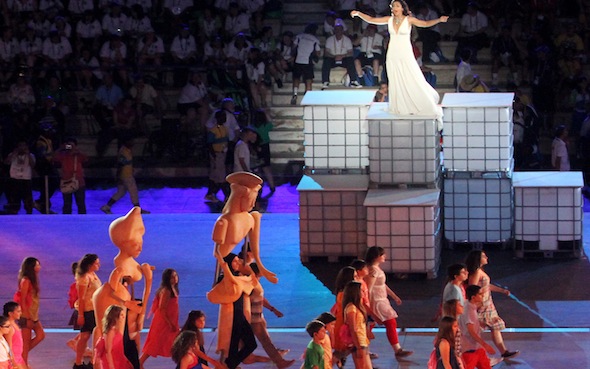 Athens bid farewell to the approximately 7,000 athletes at the Athens Special Olympics, their coaches and their families from 180 countries that attended the closing ceremony of the World Summer Special Olympics at the Panathenian Stadium on Monday night.
The end of the Games was declared by Athens Mayor George Kaminis and the lowering of the Special Olympics flag, followed with the Special Games’ anthem composed by Stefanos Korkolis.
Organising Committee president, Anna Despotopoulou said “Greece exists. Greece can,” adding that “there is not only darkness and pessimism. There is optimism, strength and humanity.”
Timothy Shriver, president of the international movement of the Special Olympics, said on his part “Thank you Athens, thank you volunteers, thank you athletes.”
At the beginning of the ceremony, over 300 members of the athletes’ delegations paraded with the accompaniment of the music of the Onirama who presented a pop rock spectacle, combined with African sounds from the Batala group.
Earlier, the atmosphere in the stadium was warmed up with the music by Emigre, Dimos Anastasiadis, Salina and George Sambanis. Korean pop group, the “Wonder Girls” also performed two of their hits. The “travellers of the world” were welcomed by Thalia Prokopiou and Themis Georgantas.
(source: ana-mpa)