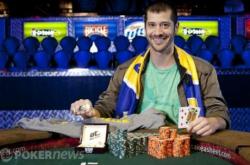 A. Polychronopoulos, a 27-year-old poker player from Long Island, New York is the first Greek who has succeeded in becoming a champion in poker.

Polychronopoulos participated in the “World Series of Poker event No 48” and defeated 2,712 players. He took first place and won the amount of $65,223. When he played in the final four of the competition, he wore a muffler of his Cypriot football team “APOEL”, as he had promised his friends he would.

Polychronopoulos, is an undefeated professional player on the Internet, and has won $2,075.799 until now, under the name Athanasios 9.

The champion is going to celebrate his win with his family in Southampton.

In cooperation with the Chinese Embassy in Athens, the China Cultural Center in Athens has launched a virtual kung fu and video contest.
Read more
Hollywood