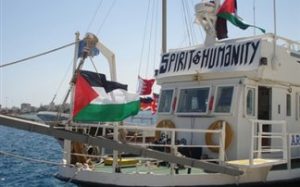 On July 2nd, the Palestinian Islamic Resistance Movement (Hamas) strongly condemned the government of Greece for stopping the Freedom Flotilla II, which was going to Gaza to break the Israeli blockade of the region.

Greece had announced it would prevent Gaza-destined aid vessels heading to the Palestinian enclave, which outraged the organizers.

Hamas said in a statement, that Greece’s decision to stop the humanitarian Flotilla is surely a result of Israeli pressure, something which violates all international laws.

“It is an inhumane act”, Hamas said in a statement, issued by the political administration in Damascus, a copy of which was received by the French News Agency. According to Hamas, this tactic is “the result of pressures exerted by the Zionist occupiers.”

Hamas called on the European Union (EU) and humanitarian organizations to pressure Greece to allow the Freedom Flotilla II to sail towards Gaza. In its statement, the movement also urged all world countries to combat the Israeli siege on Gaza.

A US ship is part of the Freedom Flotilla II, carrying over 40 international activists.