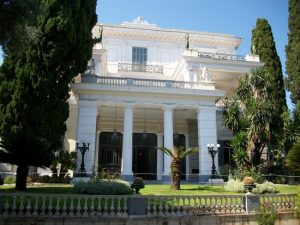 Government proposals to include a Royal palace on Corfu where Prince Philip was born has sparked off a stream of protests from around the country, mostly from residents on Greek islands who object to the sale of national heritage to pay off the country’s debts.
Prince Philip, the Duke of Edinburgh, was born at the residence 90 years ago, according to museum records and residents of Corfu, one of Greece’s most popular Greek islands are up in arms over plans to include the palace in sales from state assets.
Spiros Avramiotis. a local olive oil producer is furious at the idea of losing one of Corfu’s prime locations and angrily stated. “We have to stand up and send a message to the politicians in Athens that Corfu is not for sale, not one inch of it. Full stop.” He added, “Greece may be on the verge of bankruptcy, but surely it’s not a good idea to sell off the family silver,” a belief that is held by a great number of citizens in Greece.
Behind Spiros Avramiotis stands hoardes of islanders who are preparing to join mainland workers in protests against the government in their bid to raise €50 billion from the auctioning of state assets. The Palace is one of several state-owned properties said to be up for sale. Other locations are beaches, casinos, airports and marinas around Greece.
Fears arose over a year ago, when German politicians suggested that Greece sell off its islands to settle its debts. Although, this seemed unlikely at the time, it now looks as if the Greek government will eventually stoop to such extremes. The Royal palace, set in 250 acres of extensive grounds was once the summer home of the Greek Royal family who fled Greece after the military coup in 1967. For the islanders it is a slice of history that they are reluctant to let go of.