TechNews
GreekReporter.com Europe Statue of Alexander the Great Erected in the Centre of Skopje

Statue of Alexander the Great Erected in the Centre of Skopje 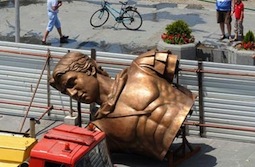 A statue of Alexander the Great will be erected in the centre of Skopje on Tuesday. According to local media, the statue, designed by the local sculptress Valentina Stevanovska, cost €9 million and is 23 metre tall.

The assembly of the statue began two weeks ago and the unveiling of the sculpture is scheduled for the 8th of September. This is the independence day of FYROM and the 20th anniversary of its independence. The statue is a part of the general plan of the country to improve the infrastructure of FYROM.

Stefan Füle, the Commissioner responsible for enlargement and European neighbourhood policy and Thomas Countryman, Assistant Secretary for Political-Military Affairs is urging the FYROM government to avoid actions that could be provocative.