GRNews
GreekReporter.comHollywoodKostas Christides Talks About His Work with Stan Lee

Kostas Christides Talks About His Work with Stan Lee 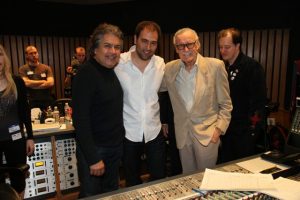 We have heard his music in well known Hollywood movies like Spiderman 3 and Swordfish. Kostas Christides began his journey from Greece at a young age, continued with his studies abroad to end up chasing the American Dream. Some people try and fail. Some others make it. Kostas is one of the people who belongs in the latter.

Over a few years, his talent and his strong will earned his well deserved position in the LA Music Industry, composing music and also working as an orchestrator to many soundtracks of mainstream Hollywood movies. It is no coincidence that in 2006, his music for the film ‘Eduart of Angeliki Antoniou’, won the Greek Competition Award in the Thessaloniki Film Festival. Soon we will be able to hear the music he composed for the documentary that depicts the life of the legendary Stan Lee.
“It’s a huge challenge working in a documentary that portrays the life of a living legend. He is the father and creator of Spiderman, Hulk, Fantastic Four, X- Men, Iron Man and many other comics characters. He is an idol for million of fans of this genre. I had the chance working with an orchestra of 92 people and with a chorus of 60 people. It was an amazing moment when the person in question came to the studio where we recorded and obviously ecstatic from the result, he stepped up to the pondium and thanked everybody. I hope I will have the chance to live more moments like this in my career”.

“The production of this documentary was made by ‘1821 pictures’, a Greek production company based in LA that is headed by Paris Kasidokostas and Terry Dougas. I was especially happy to work with Greeks and I am sure that you will see this happening more often here in LA”.
“I just finished with the production and publishing of my soundtrack from the film ‘Perkins 14’, a thriller in which I worked last year. Also a little while ago, I wrote music together with Christopher Young for the first movie, (‘The Black Tulip’), that was shot and produced in Afghanistan after 30 years. We had the chance to work with Natalie Cole who performed the song for the movie.”

“Very soon I’ll start writng music for a Greek movie and I am preparing a few pieces for a film music concert that will also take place in Greece. Also we are in talks with Nassos Vakalis, an Emmy winner animation director, for a very cool and exciting animation production that will take place over the course of the next 18 months”.