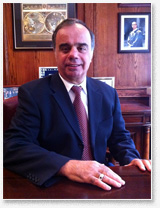 Mr. John Dagonas has been elected SAE Coordinator in Canada Region, following the resignation of Costas Menegakis from this position due to his election in the Canadian Federal Parliament.

The election of Mr. Dagonas was decided unanimously at a meeting of the Regional Coordinating Council of Canada, a member since its foundation.

John Dagonas was born in Mytilini, in 1948. He emigrated to Canada in June 1966, where he resides today. He graduated from the Polytechnical Faculty of the University of Ryerson, the Department of Civil Engineering and the Canadian Institute of Control Surveyors.

For more than 35 years he has been activate in the business area of building construction, beverage bottling, conference centers, receptions and catering.  Today, he is considered to be one of the most important Greek businessmen and charity men of the Diaspora, according to a report of SAE Canada.

In 2002, he was named Archon of the Ecumenical Patriarchate.

He was, among others, President of the Greek Heritage Foundation, of the Hellenic-Canadian Federation of Ontario and of the Federation of Aegean islands, Director of Greek Congress, Greek Nursing,  the National Bank of Greece, West Park Hospital and Socrates Schools in Mississauga .
Over the last two years, he has been the head of the Hellenic Hope Centre responsible for the construction of a larger and more modern center for the hospitality of disabled people over 21-years-old.
Recently, following an appeal by the Members and the Board of Directors of  Toronto’s Greek Community, he also works for the Economic Sanitation Agency of the Institution.