GRNews
GreekReporter.comGreek News"Portraits of Prominent Greeks in the U.S.A" Released

"Portraits of Prominent Greeks in the U.S.A" Released 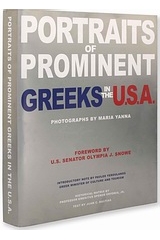 Portraits of Prominent Greeks in the U.S.A. is a unique record of 63 famous individuals, each one in his/her field, who share not only a Greek heritage, but also the same passion to fulfill their ambitions.

This volume of 288 pages, will capture the readers attention with its colorful, candid portraits and the inspirational individuals that are portrayed within them. From scientists to actors, politicians to journalists, business people to artists, this careful selection provides insight into the lives of remarkable people who excelled through hard work and persistence. They are living proof of the “American Dream”, yet they have not forgotten their Greek roots.

Each person is portrayed in a four-page section with portrait and documentary photographs, along with biographical information, exclusively made for this edition.

Maria Yanna, who is the author of Portraits of Prominent Greeks in the U.S.A., travelled extensively throughout the United States between 2007-2009 and met with each of the 63 individuals in order to photograph and interview them.

The Foreword is written by Senator Olympia J. Snowe, and the Historical Matrix by Historian Speros Vryonis.