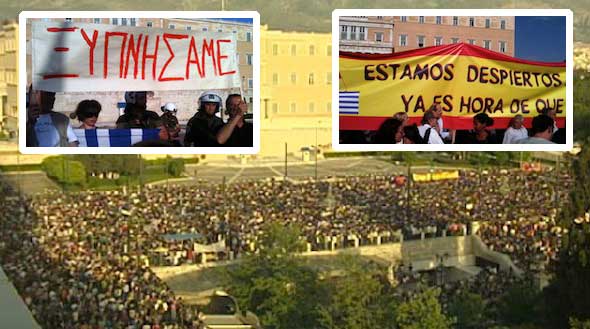 After the successful “Los Indignados” protest in Spain where thousands of Facebook users gathered peacefully to protest against the economic crisis, members of the social network in Greece have now followed suit.
Syntagma Square, aptly named after the Greek word “constitution” became jam-packed with protesters long before 6:00 p.m. which was the official time for the protest to begin. Thousands of Facebook users, mostly young people, accepted the invitation sent out over the network within minutes.  On Wednesday evening, the supporters gathered to show their total support.
Organizers and protesters, calling the protest “Indignants at Syntagma” claim they  want to send a message, “to protest against all those who have led the country to its present situation and the grave crisis every citizen is facing.
Facebook, often singled out for criticism in the past through the media, proves its influence in a positive light as it brings out people and their strength in numbers.
Another 5,000 gathered in the northern city of Thessaloniki and similar protests were planned in the cities of Patras, Ioannina, Iraklio and others.
“Thieves, thieves,” the crowd chanted in Athens as a small police force looked on, with reinforcements in reserve.
“What time is it? Time for them to go,” read a banner.