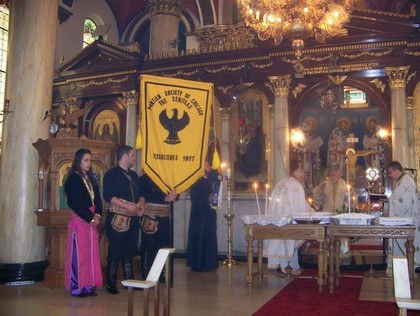 Events in memory of the Pontian Genocide took place in various cities in the United States.  They were culminated with the displays of the Greek and the Pontiac flag in the “Bowling Green” region in Manhattan, as well as with a large gathering in the Chapel of the Holy Monastery of Panagia Sumela, in New Jersey. Co-organizers of the event were the Pan-Pontiac Federation of USA and Canada and the Holy Virgin Soumela Foundation, in cooperation with Pontiac associations.

In the chapel, the Mass was celebrated and a memorial service was officiated by the Bishop of New Jersey Evangelos. On behalf of the Pontiac Youth, Louisa Molohides read a poem by Vassiliki Tsanaktsidou about  the history and traditions of Pontos, and then there was a wreath  from the Consul of Greece in New York Vagelis Kyriakopoulos, the General Consul of Cyprus Kula Sofianos, military attaché, Colonel Chris Mesaretzidis and leaders of the Pan-Pontiac Federation and the Pontiac associations of America, Tsekeridis Elias (president of the Federation of Greek Societies of New York), Panos Stafrianidis (Vice-President of the Federation of Greek Societies of New Jersey), George Tsilfidis, Iphigenia Pavlidou-Ikonomou and Stephen Amanatidis.

At the end of the event, a presentation of a research project titled “Grandmother Refugee, Immigrant Mother” by the women’s association of the “Pontos” association was presented. The survey was based on interviews with elderly women who immigrated to America as brides in the 1930’s, ’60s and ’70s. For important issues regarding this research, the women’s association talked with Ioanna Tsilfidis, Vassiliki Tsanaktidou, Parthena Kalogeridou, and biologist researcher Dr. Helen Kotanidi.