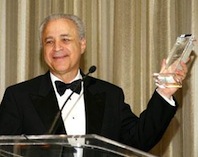 The Ambassador of Greece in the United States, Vassilis Kaskarelis, was declared “Diplomat of the Year” by the International Affairs Council in Los Angeles.  Its members are opinion leaders, prominent businessmen and academics during a special event in Beverly Hills, California .
This award honors distinguished personalities of the diplomatic corps on the life and achievements for their contribution in the society of nations. This year’s winner, as noted by the Council President for International Affairs, Marvin Souomi, “is arguably worthy of this honor. ”
Mr. Kaskarelis was selected among 180 diplomats  in the U.S.
The event ended with the famous singer Ariana Savala, daughter of the unforgettable Greek-American actor Teli Zavalas, which was presented by the Consul General in Los Angeles, Elizabeth Fotiadis.