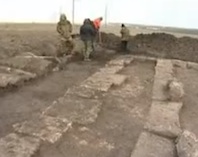 What is considered to be a unique discovery has been made in Taman, South Russia, at the Black Sea. The ruins of an ancient Greek city, dated around the 6th century BC, came to light.  Archeologists are stunned both by the number of the findings and the condition they were found in.

The excavations are proceeding with extreme caution, in order to avoid damaging the city’s ancient fortress. According to historians, it is assumed that the ruins are the temple of Dimitra, the ancient goddess of fertility and agriculture, while they  were able to determine the very spot of the altar. But, the number of the findings induce them to believe that a whole city has been found.

The conditions of the excavations are being extremely difficult due to how remote the place is, the lack of running water, the very cold weather ( up to -25 C during the night ). Another difficulty is the lack of money, which for the moments is being aided with the help of volunteers who are paying 13 euros a day each to participate.
[youtube]_qEhu-NN3Eg&feature[/youtube]
(source: ellada-russia.gr)