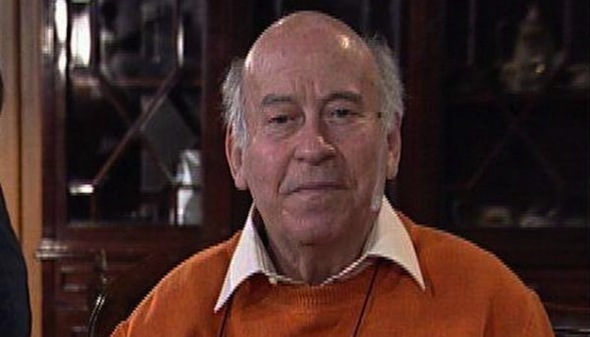 Thanasis Veggos died today, on the 3nd of May 2011, due to serious health problems. Veggos was a great actor and director.
He was born on May 29, 1927 in Piraeus. Due to economic difficulties, he had to work since his childhood. On a personal level, he was exiled from 1948 to 1950 for political reasons. On Makronisos island, he met director Nikos Koundouros, who later gave him his debut movie role in Magiki Polis (1955). His first major role was in Psila ta Heria Hitler (“Hands Up, Hitler”) in 1962.
Extemporization, surreal humor and social criticism are the dominant elements in his films. He often played everyday characters struggling to get by. He has also portrayed anti-heroes, acted in entertaining dramas, and also performed in theatre productions, such as in Aristophanes’ comedies. His characters are often named Thanasis. A documentary of his life, which title translates as A Man for All Seasons, was produced in 2004. During the “Golden Sixties” of the Greek film industry, he made his most famous films such as Secret Agent 000, Enas Trellos Vengos and many others. Most of them were produced by his own company Θ-Β Comedy Films (Tainies Geliou)
In the year 2000, his car crashed into a train, but he survived. He later produced safety advertisements on the matter. Veggos was married and has two children. In 2008, he was appointed Commander of the Order of the Phoenix by the President of Greece, Karolos Papoulias, thanks to his incomparable talent.
During the last decade, Veggos has starred in several extremely popular television series but was otherwise withdrawn from public life and never gave interviews or made public appearances. A notable exception was during a special commemorative event, held by the municipality of Piraeus on 2008, in which it was announced that the public square next to his childhood neighborhood would be renamed in his honor. Veggos, surrounded, by his wife Mina and two grandchildren, was deeply moved to tears by the gesture. Certainly, Greece has lost a most lovable and larger-than-life character.
[youtube]OJ_OS5000w0[/youtube]

December 8: Naval and Air Disasters Make it a Cursed Day for Crete