GRNews
GreekReporter.comGreeceChristos Anesti - Christ Has Risen - Throughout Greece and the World

Christos Anesti – Christ Has Risen – Throughout Greece and the World 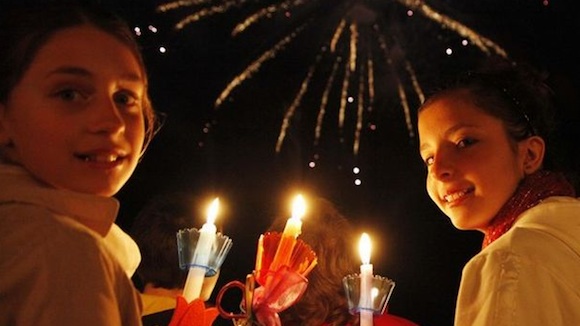 On Holy Saturday night Greeks gathered at their local churches to celebrate the Resurrection of Christ. Then at dinner tables they enjoyed the traditional Easter soup “mageiritsa”  and cracked red eggs. Beside the crisis that has hit Greece most of the population traveled to the villages for the Easter Holiday to spend time with their families.
A Greek tradition is to celebrate with fireworks when the priest says “Christos Anesti” (Christ Has risen). A chorus of thunderous sound and dazzling displays of color are created by the hundreds-if not thousands-of fireworks outside the Greek churches. Below you can see a video from the Greek island of Folegandros showing this tradition.

Ecumenical Patriarch Bartholomew celebrated the resurrection of Christ at the Ecumenical Patriarchate in the Phanar neighborhood of Istanbul.
Archbishop Ieronimos conducted the divine liturgy at the Metropolis of Athens, that attracted thousands that had decided to celebrate Easte in Greece’s capital. In a candlelit church people shared the message of love and wished “Christos Anesti” (Christ Has Risen) to each other.
President of the Hellenic Republic, Karolos Papoulias, is in Corfu and will celebrate Easter at the Greek Naval Station of the island.
Prime Minister George Papandreou, celebrated the Ressurection of Christ in Hydra with his family while Greek opposition leader Antonis Samaras spent Easter in Nafplio.
Greek Orthodox celebrations took place throughout the world, including in USA, Canada, Australia, South Africa and in every Greek Orthodox community.