Chancellor Linda Katehi in a Tell All Interview 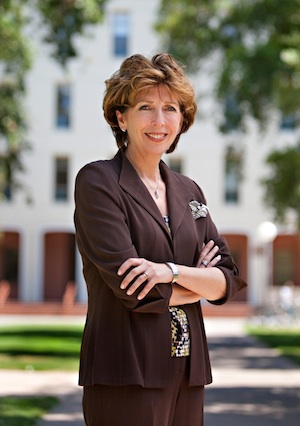 Linda P.B. Katehi became the sixth chancellor of the University of California, Davis, on August 17, 2009. As chief executive officer, she oversees all aspects of the university’s teaching, research and public service mission.

Tell us a little bit about your childhood and youth in Greece.

I grew up in the mid 1950s in the island of Salamina, just off the coast of Athens. My family was of modest means but my mother always believed that schooling is very important in improving one’s quality of life. She encouraged me to go to school. It just so happened that from an early age I was very good in math and science. The teachers I had, seeing that I was very good, were very encouraging.

In 1969 I moved to Athens and went to the 1 st girls high school, which was a technical high school and then I studied for my undergrad at the National Technical University of Athens (NTUA) where I graduated from. In fact, I had met the current President of USC, Dr. Max Nikias who also happened to be studying there at the time.

You were studying at the NTUA during a period of high polarization in Greek politics where the students at NTUA were very active politically. Were you involved in politics at the time?

Yes. In 1973, all students at the NTUA were involved in politics. It was a turbulent time in Greek politics…

How do you believe your experiences at the time shaped you to become such a successful person later in life?

I grew up in a place stricken by poverty. Greece was decimated after WWII and the 1944-1949 Civil War. There were days that I went to school without a meal. Poverty was an important motivator to seek a better life and made me commit to change my life for the better. I happened to discover my talent in math and science at an early age and subsequently in high school I decided to become an electrical engineer.

Tell us a little about your choice of coming to the United States. Dr. Alexopoulos mentioned to us that when he initially proposed to you to come to the US, you had unequivocally turned him down. What made you change your mind and when?

Indeed, at the time this proposal came, I did not really grasp what graduate school was all about. A little later in life, I was working at a research laboratory in Greece. While there, I was able to associate with people who had Master’s and Doctorate degrees and I noticed how much more they knew compared to someone who only had completed an undergraduate education. So during Easter in 1979 I decided to make the leap across the Atlantic and I came to UCLA in the fall of that same year.

You received the AHC Aristeio Award in Academics for your exceptional achievements in your field of expertise. What is the biggest professional achievement that you are proud of?

I have to say that it is becoming a member of the National Academy of Engineering as well as becoming a Chancellor at UC Davis, one of the top research universities in the nation.

Please tell us a little about your engineering background. What did you specialize in?

My primary field of expertise is antennas and the way they receive signals. My research focuses on how to make them smaller and more efficient by improving their circuit design. I am still coordinating a small group of researchers at UC Davis who are conducting research in this field, so I am still active.

You made a successful transition from being a high-profile electrical engineer to running two large universities, U Illinois Champaign-Urbana and now UC Davis. What was the motivation behind that and what are the challenges?

That transition you are referring to from pure research to administration has actually been very slow and it began during the time I was at the University of Michigan in 1994 as an associate dean for academic affairs and graduate education. A researcher reaches a point in his or her career where his or her own experience in how to conduct the research becomes more important than his or her ability to innovate. In other words, I realized I could offer more value to society by applying my ability to direct other innovators rather than to innovate myself. For example, in one year I was able to guide 44 Ph.D students into graduating. It is a very satisfying process. In addition, I was motivated to improve the graduate experience, especially for women.

Are you involved in politics at all?

No. I haven’t had much involvement in politics.

You chaired the Presidents Committee re: the National Medal of Science. What do you think of President Obama and his policies and vision with regards to education, science and technology?

Serving on the Committee gave me a tremendous opportunity to look at individuals who have made important contributions to our world and I very much enjoyed it. President Obama deserves a lot of respect since he is the first President in decades that recognized the importance of drafting a direction and a strategic plan for the advancement of science. He truly understands how important it is for our country.

Despite the rhetoric though, the political system is not addressing these issues. Why is that in your opinion and what is the solution to actually re-launching the next Apollo Program? Are President Obama’s goals realistic without a willingness on behalf of the broader political system and the American people?

The answer to this is very complex. For starters, our current political system is weak and true leadership is badly needed but lacking. We have a society that has created needs that are expensive. We are experiencing demographic changes such as the aging of the baby boom generation, advances in medicine that prolong the average lifespan, an expectation for better health care and a higher quality of life. At the same time, we have a societal crisis of values and an unwillingness to see that this course is unsustainable in the long-run. The result is the creation of serious political gaps, polarization along party lines and our leadership and voters losing the sense of what our country’s strategic goals should be.

What about Greece? What are your thoughts on the sovereign debt crisis there? What caused it, who was responsible and do you see the country emerging from the doldrums? What policies do you think need to be implemented to successfully improve the situation?

Let me start by saying that I cannot speak with much certainty about Greece. I haven’t lived there for a long time, so my information and empirical experience is limited on that subject. What my belief is that the political leadership in Greece made grave directional mistakes during the late 70s and the 80s. It had an opportunity to develop a functioning democracy and bring its economy closer to European standards but it failed. There were decisions made that compromised education and light manufacturing and drove away whatever productive capacity existed. The policies implemented lead to what we see today: heavy indebtedness, outdated infrastructure, a counter-productive culture and eroded educational institutions.

What do you make of the leadership of George Papandreou?

I am hopeful with the direction of the new government. Hard choices need to be made and the new leadership seems like is making a good effort at addressing them. In Greece you have a good talent pool but also an anachronistic bureaucratic system that needs to be fundamentally changed. Only time will show which one will prevail.

There was meeting recently between heads of Greek Universities and prominent Greek-Americans in US Academia at the Greek Embassy in D.C. with the goal of exchanging ideas on re-vamping tertiary education in Greece. Did you attend? If yes, what was your take on that?

I think that the leadership of some Greek Universities is making a good-faith effort in improving the system. However, I do believe that some of the leadership is captive to various agendas and they are not committed to implementing material change and they need to be.

In the US, university-corporate cooperation, which has produced economic powerhouses such as Google & Broadcom is frowned upon in Greece. Also, what is called “university asylum” is a hot issue. What is your position on those matters?

The attitude of the university leadership vis-à-vis corporate interests has been influenced by political agendas in Greece. I see it is very important to develop university-corporate partnerships and I hope that reason will prevail over special interests. There was a time that “university asylum” was important for the protection of civil rights. Greece has been a democracy for more than 35 years and I think that it is an anachronistic concept at this stage. “Asylum” provides safe harbor to negative elements of society. What pains me the most is that it is being exploited by university leadership with the intent to avoid implementing changes that are necessary for the improvement of student life and quality of education.

So many Greeks become engineers, yet they are later forced to immigrate abroad because the country does not offer them the opportunities infrastructure development and research. Some would argue that Greece is too small of a country to be able to build an industrial R&D base. Others say that Greece should focus on tourism and shipping. What do you make out of it? Do you see this as a situation that can be reversed and if yes, how.

As stated earlier, through a series of bad policy decisions in the 70s and 80s destroyed the bulk of its manufacturing infrastructure. External conditions did not help either. The economy cannot solely sustain itself on services and services alone. Policies to create some light and advanced manufacturing must be implemented and I am confident that they can allow the economy to re-establish a small productive base.

Do you ever consider returning to Greece and if yes, how and when?

I feel that I could be more useful to Greece as an outside advisor rather than an insider, so I have no immediate plans to return there.

*Alex Mizan is the director of American Hellenic Council