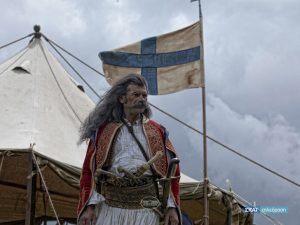 In the series first two hundred years of Ottoman Rule of Greece was presented as one of the most affluent periods in history. Pax Ottoman was praised for a period of wealth and prosperity among Greeks. Religious freedom and economical independence were also mentioned in the documentary. The show documents social effects of Turkish life style on Orthodox Christian population, their daily habits and clothing. The influence of Russian Orlov Brothers in ignition of the early stages of revolution and Greek losses due to their efforts were also emphasized. The initial rejection of the revolution by Ecumenical Patriarchate in Istanbul as an act against the safety of “Ottoman citizens” was also mentioned.

Turkish press highlighted the series as an antithesis to official Greek history. Headlines read “Ottomans were not that bad after all”. In some articles upheaval in Greek press, the cries of Metropolitan of Thessaloniki Bishop  Anthimos and LAOS Members of Parliament were quoted.

‘1821’ was written and directed by Petros Tsatsopoulos for Skai Tv. Historical background was presented by Thanos Veremis and Iakovos Michailidis. It was produced on location from Istanbul to Mani in Peloponessos.