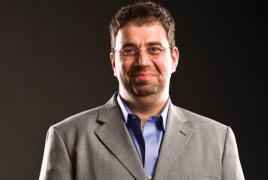 Turkish Foreign Ministry offered a post to Daron Acemoglu as the country’s permanent representative to the Paris-based Organization for Economic Cooperation and Development (OECD). News sources first claimed he would be appointed as Turkish ambassador to France, but Foreign Minister Davutoglu, in his press conference yesterday corrected that mistake without naming names.

Acemoglu, a Turkish/Armenian and a prominent economist and academician has rejected the offer noting that his academic career has priority over political inspirations.

Critics see the offer as an act to save face against allegations of mistreatment of minorities in Turkey. Government spokespersons claim they want to normalize relations with Armenia in accordance with Turkey’s so called “zero conflict” policy with her neighbors.

Daron Acemoğlu is currently Professor of Applied Economics at Massachusetts Institute of Technology and winner of the 2005 John Bates Clark Medal. He is said to be a good candidate for a future Nobel prize in economics.

Although there are no restrictions in law, minorities in Turkey were never appointed to official posts by the state since 1950’s and could not held public office. There was never a minority Member of Parliament nor a high level public servant since then.