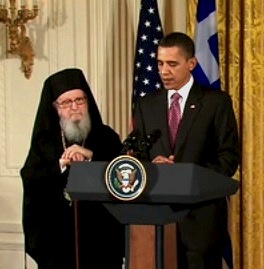 President Obama celebrated the 190th anniversary of Greek Independence at the White House. Greek government officials and prominent Greek-Americans attended the celebration in the East Room on Friday 25th 2011.

“Today we are celebrating the bond between two nations that has existed as long as we have existed as a nation.”

“Our Founding Fathers were students of Greek philosophy and Greek history, drawing on Greek principles to guide our own nation in its earliest days,” Mr. Obama said. “When it was time for Greek revolutionaries to fight for freedom, they looked to the United States for strength and support. And to this day, the United States and Greece shares a bond rooted in common values and common ideals.”

Archbishop Demetrios of the Greek Orthodox Archdiocese of America who joined the President on stage, urged Mr. Obama to continue to stand for freedom and democracy.

Earlier, President Obama called Greek Prime Minister George Papandreou who was participating in the EU Summit to congratulate him on the Greek independence anniversary and discuss current issues.

Please see below the full transcript of the President’s remarks during the event:

THE PRESIDENT:  Well, good evening, everybody.

THE PRESIDENT:  Kalispera.  (Laughter.)  Thank you, your Eminence, for the kind introduction.  It is always an honor to welcome you here in the White House.  We’ve been friends for quite some time now, and his Eminence always displays such grace and good humor and is so generous.  We are so very grateful for your leadership.

I want to especially welcome Deputy Foreign Minister Dollis for traveling all the way here from Athens to join us today.  (Applause.)  I spoke with your Prime Minister, our good friend Mr. Papandreou today, and I wanted him to extend our congratulations to the entire Greek nation.  And we very much appreciate you being here to represent your government.

Tonight we reaffirm the bond our two nations have shared for as long as we’ve existed.  Our Founding Fathers were students of Greek philosophy and Greek history, drawing on Greek principles to guide our own nation in its earliest days.

When it was time for Greek revolutionaries to fight for freedom, they looked to the United States for strength and support.  And to this day, the United States and Greece shares a bond rooted in common values and common ideals.

As allies, we stand together -– not only for our own security, but for the freedom of peoples around the world.  Right now, Greek and American soldiers are serving together in Afghanistan.  And as we celebrate the independence of the Greek people, the United States and Greece are standing with our NATO allies to support the Libyan people as they stand up for their own freedom.

So I just want to express the extraordinary thanks that I give to the people of Greece for their friendship, and for their contributions to the life of our nation and so many others.  I also obviously want to say to all my great friends in the Greek American community, how much I appreciate your support and your friendship, and I’m glad that we have one more occasion to celebrate together here in the White House.  So it’s wonderful to see you again, and I hope you guys have a great time today.

All right?  Thank you very much, everybody.  God bless you.  (Applause.)