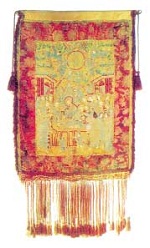 The historic banner of the 1821 Revolution, treasured at the Agia Lavra Monastry, a few kilometers far from Kalavryta, Achaia, is going to be transferred to Chicago.  It is traveling to Chicago for a celebration organized by the Society “Agia Lavra” of the city. The Society members, who come from Kalavryta, will celebrate the 190th anniversary of Greek Independence Day and the 85 years since the foundation of their Society. The sacred banner of the Greek Revolution will be transferred to the U.S.A. by Kalavryta’s mayor George Lazouras and a member of Parliament, coming from Achaia, George Spiliotopoulos. The celebration will be attended by governor of Chicago Pat Quinn, Ministers of Foreign Affairs and Finance of Illinois Jesse White and Judy Baar Topinka, Mayor of Addison, Illinois, Larry Hartwig, Commissary of the Metropolitan Water Reclamation District of Greater Chicago Mariyana Spyropoulos, lots of friends of Greece and personalities of the American and the Greek-American society. “We are all particularly touched, as it is one of the greatest events held by the Greeks of the area, on the occasion of the Greece’s Independence Day celebration”, Mr. Spyropoulos said. He added, “The holy banner of the Revolution of 1821 and international symbol of freedom travels for the first time abroad. I would like to congratulate the people who organized this and to thank the Mayor of Kalavryta for his co-operation. The aim of ‘Agia Lavra’ is to maintain the promotion of Greek cultural and historical heritage”.